This is the start of my next laser. I will be transplanting the tube and psu from a k40 into a custom gantry. Motion control will be run through a GRBLDuino Mega Integrated Relay running GRBL running in CoreXY mode. Exhaust fans will be tied to the mist relay and air assist to the coolant relay.

The last photo is why you cant trust hole positions on cheap parts. 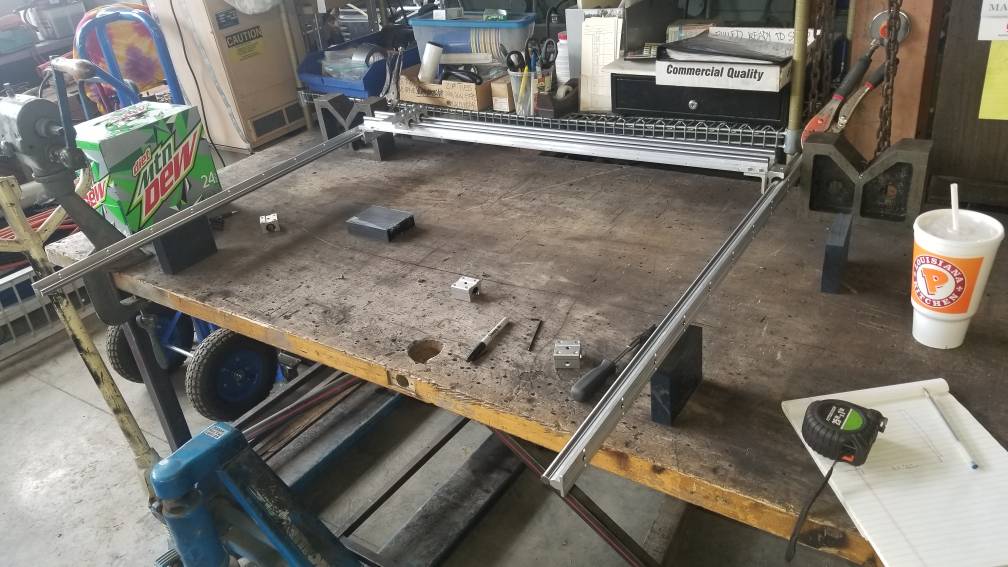 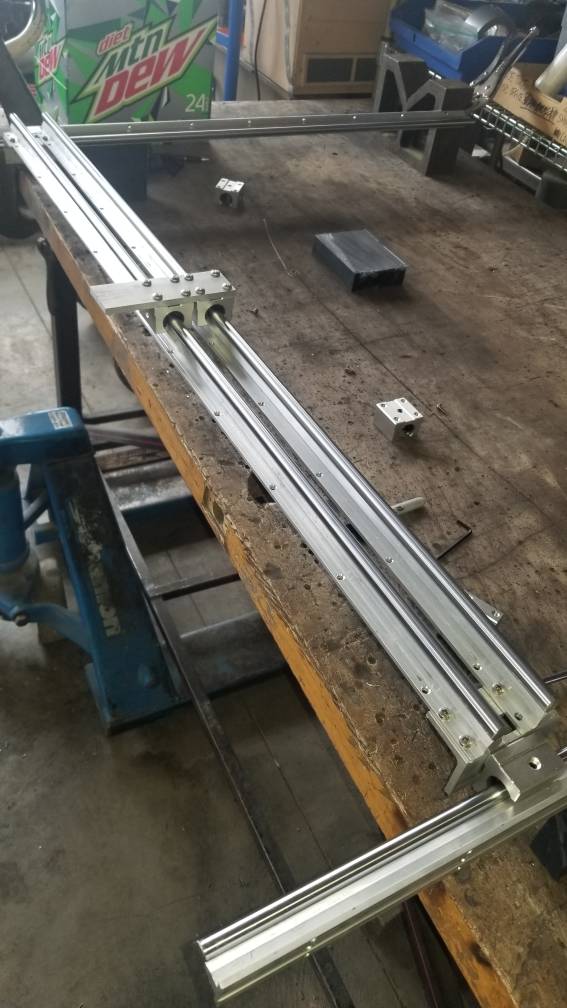 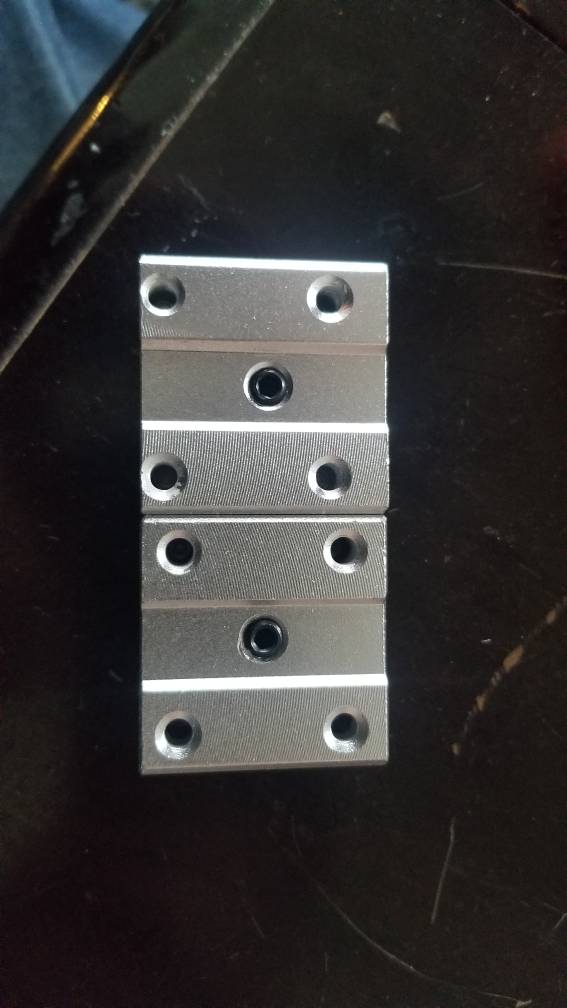 I would designate that last part as a reject and replace it.
Top

That's exactly what I did. Well, I had 8 but only intend to use 4-6 so I had spares. Im a machinist, so it was just a surprise when I had made the mating bracket on a mill accurate to 0.001" but the block was off by nearly a quarter inch. It took longer than I care to admit to notice that it was a factory defect and not my fault. I should have drank more coffee apparently

That really is pretty big. How large will your work area be? I'm eyeballing it at about a meter.
Top

Good eye, it will be about 38x38 inch of workspace which is in fact about 950mm

Made some progress today. I got the mounting holes for the Y rails drilled (18 per rail). Once the rails were installed I was able to measure, cut and weld the rest of the gantry frame. Parallelism is better than I had hoped for, so shimmying is unnecessary. Tipping the gantry more than about half an inch on any direction results in the gantry freewheeling to the low side. 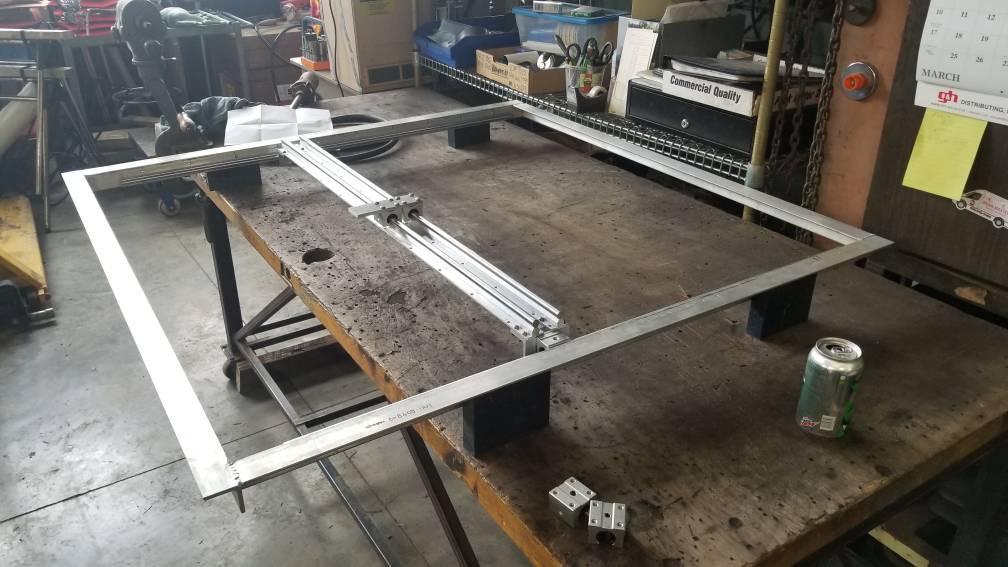 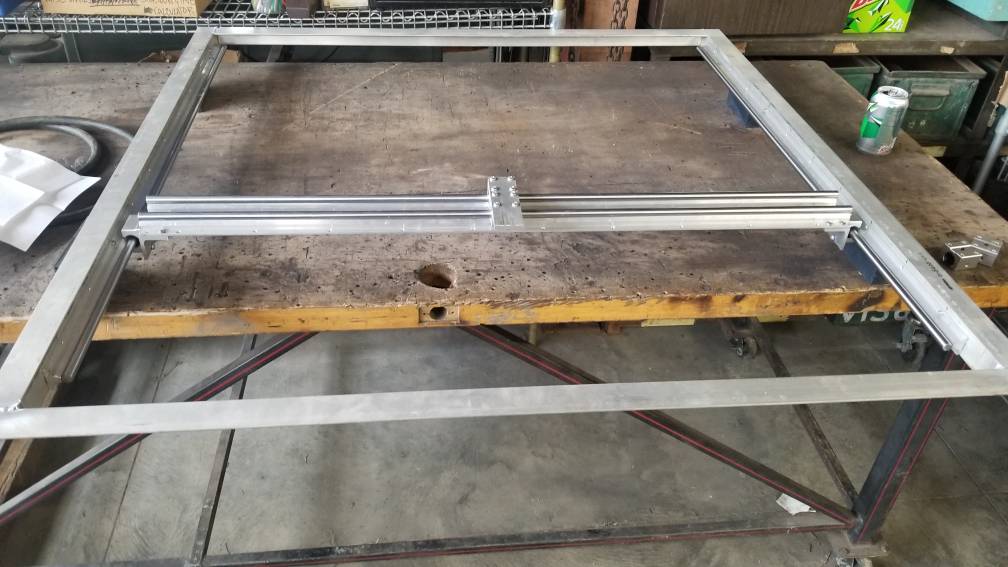 Made a little progress the past week or so. Made some pulley brackets, and motor mounts. Laid out the belting and started getting my head around where what will be fitting. Getting closer to hooking up control and seeing if it moves properly 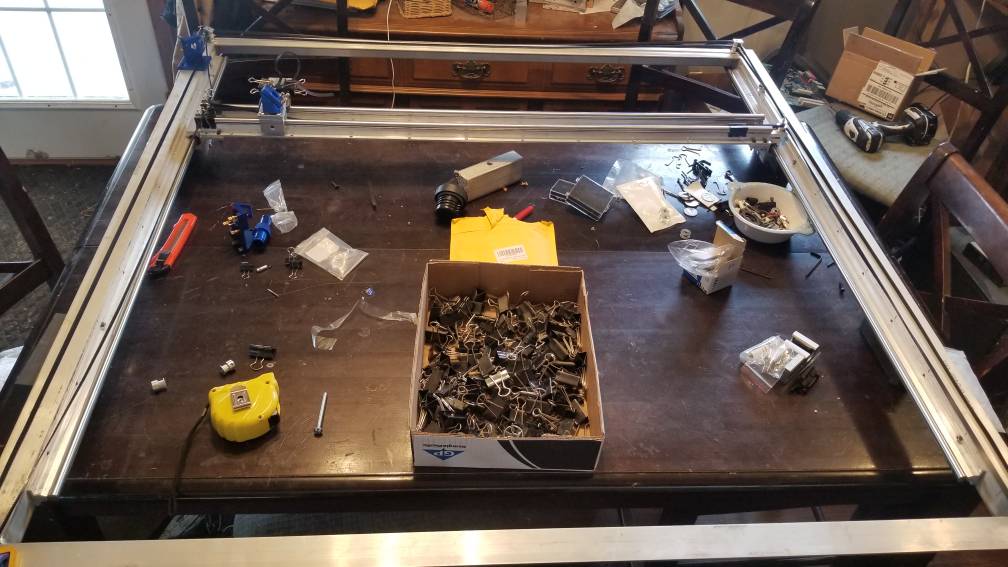 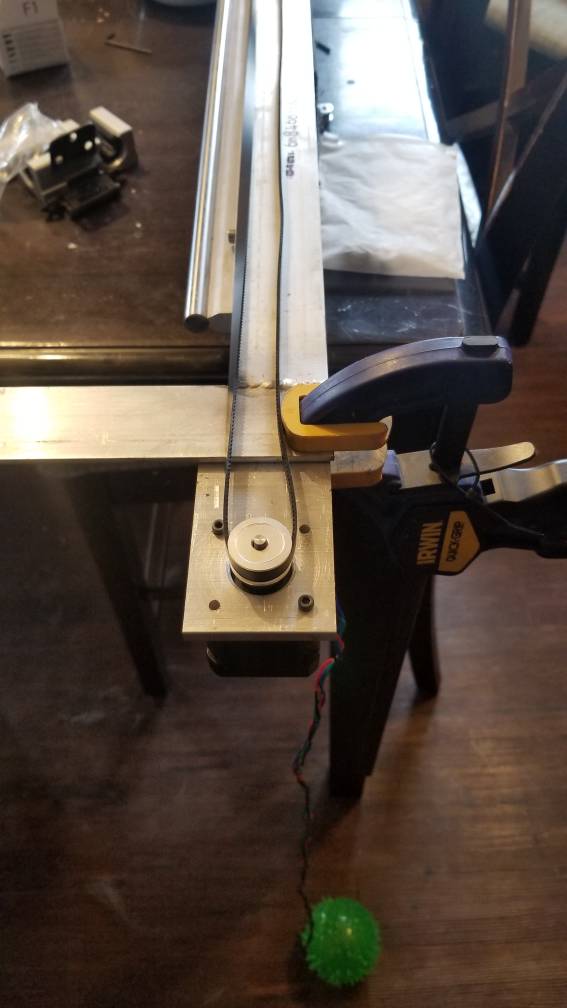 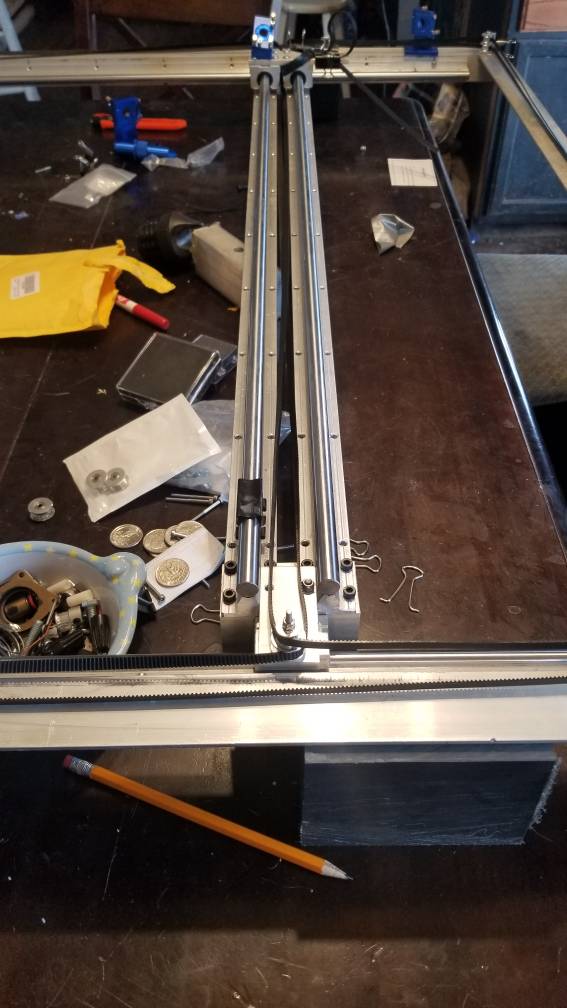 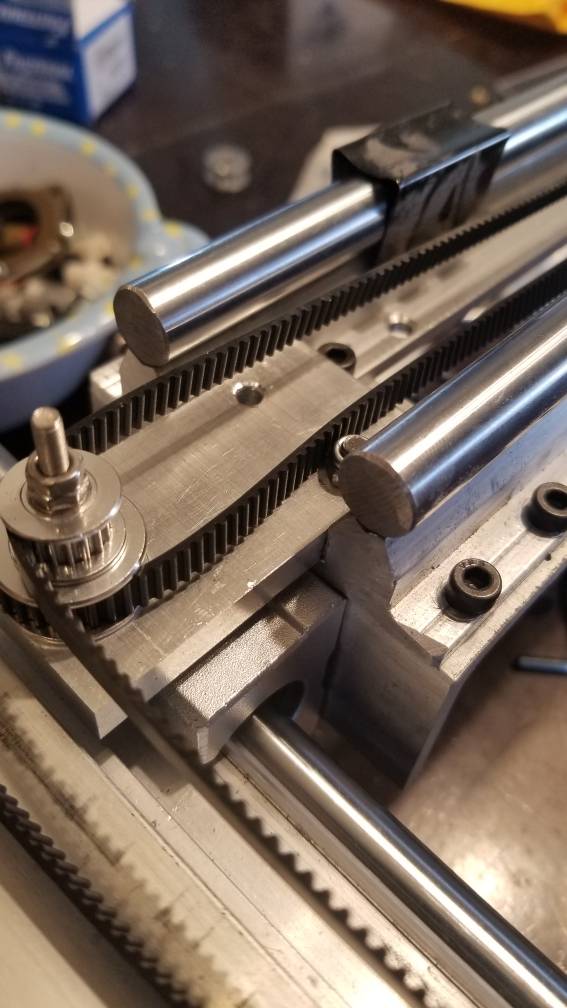 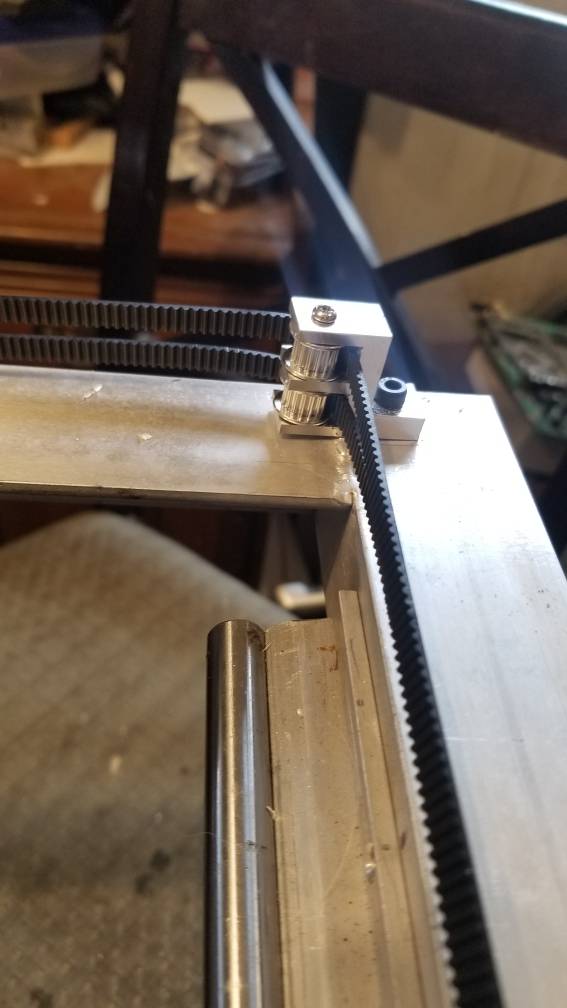 Well, after a rather long break on this project, I'm back on it. I changed my mind on the kinematics and decided to go back to the traditional cartesian xy, mostly because the belts for corexy were so long that stretch was going to be a problem keeping the laser path true.

After getting the 3d printer back up and going, making parts to try was going far faster. I made most the brackets and mounts within a few days. Though there were multiple revisions of each part to get it to a design I could accept within reason and move to the next.

I'm aware that the enclosure being made of wood is a bad idea, but it is allowing me to keep the project moving forward without having to design a permenent enclosure for an unfinished design. Once it is all up and running with a c02 laser tube I will shear some metal and make a proper enclosure.

I'm currently running a 5w laser diode on the head instead of the laser tube. Those tubes are too fragile and expensive to be prototyping around. 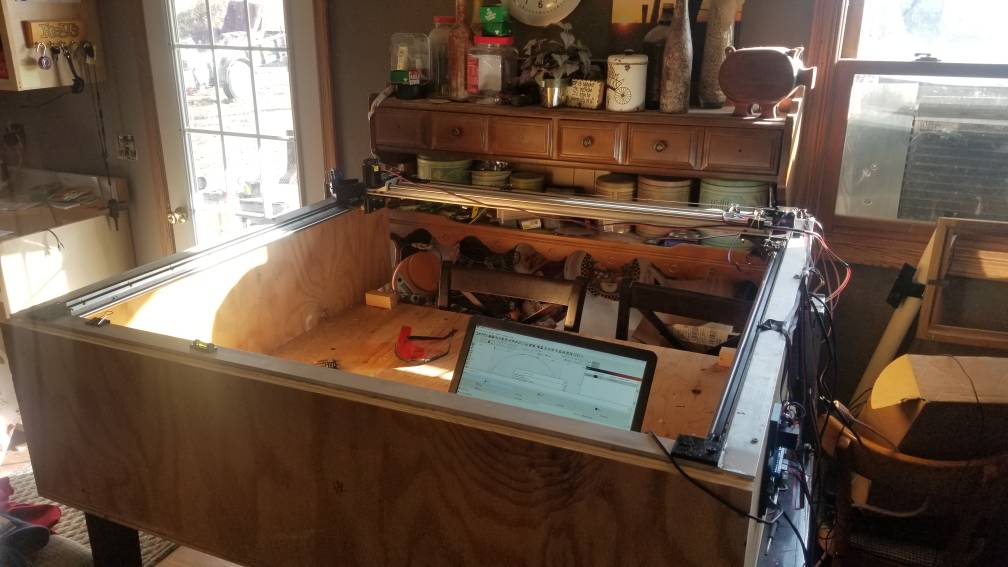 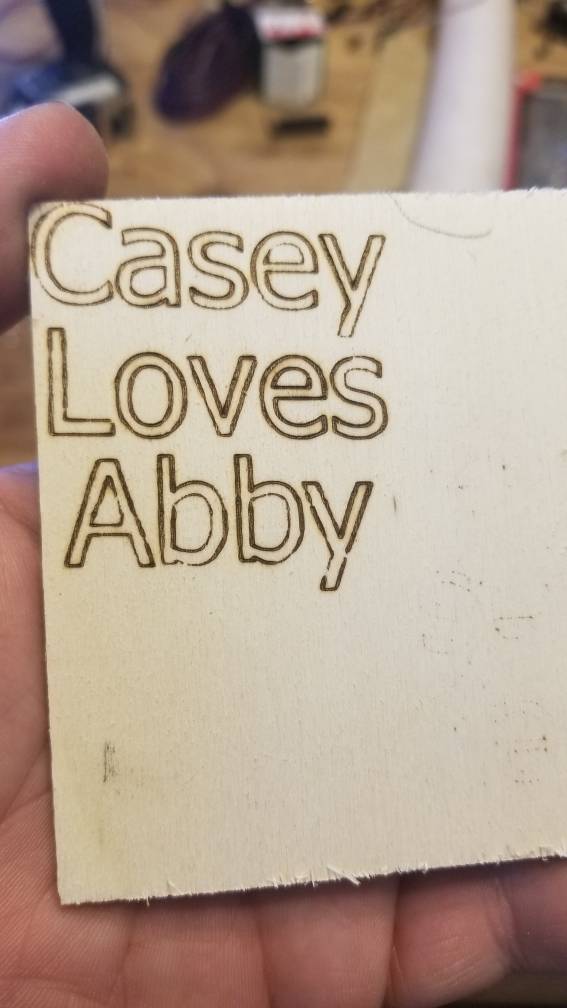 Very nice! I want to upsize my laser like that someday.
Top

It's coming along. At a stop for a bit since it is in a usable state now. My wife wants to make some signs for her work with it. They may take 20 hrs to do with a 5w diode, but they will get done. Then on to buying another k40 to rob the co2 laser components